I’m a fan of poets and poetry, but sometimes poetry is just too dense. It’s like running a marathon all from the comfort of my armchair. It’s not something I enjoy doing at first and then it starts to feel good and then I don’t want to stop. I’m wide awake on adrenalin and before long the chapbook—c’est fini.

I picked up Adam Moursy’s book of poems, Dizzied By Chance, and wondered what to expect since these poems were touted to be of a Fringe Existence. This is what I found—poems that are raunchy, urbane, laced with First World desperation, and that require a 12-step program all their own. From one mind-twisting relationship to the next and from one drunk to another, the ennui and disarray of the narrator’s interior word are reflected in the exterior reality. 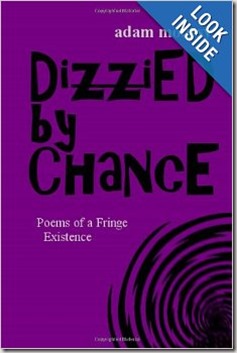 “damnation” is a particular favorite because it succinctly describes what I call “the luck o’ the Irish.” If anyone ever wishes that kind of luck on you, punch that person in the throat. ‘Tis not a good thing.

“all I did was ask what she’s into…” struck a chord because it spoke to the deviant in me. We all have those things that we don’t tell other people unless we’re very drunk or feel very safe. I’m thinking she was drunk.

Perhaps my favorite is “spread the word.”

now I need to blog…

and the ending just blew me away because it so captured how I feel about social media as an artist (as opposed to a business woman). If anything makes me dizzy, it’s Twitter.

“bestial” was high up there too. I like books, songs, and poems that mention the Devil (must be capitalized) and God in the same paragraph. The twist at the end gave me a deep satisfaction.

I also felt that “dinner with Jesus,” which addresses the end-of-times and the futility of waiting for it to happen, was a timely rant. With Ragnarok predicted for February 22, 2014, thus having come and gone, I think it most fitting to mention. Perhaps Moursy could follow up with a poem about the crushed faith of the believers in his next volume. That would be tasty. Hail the almighty taco!

“hot damn” was the one poem that did nothing for me. I think every good work has that one flaw that proves the creator is human. As with all art, my opinion is subjective and others might rave about this particular offering, but it left me limp. Perhaps it was the incessant splishing and splashing – all those “esses” creating a cognitive dissonance that perhaps was intended.

As I write this, I think that Moursy should consider joining a melodic death metal band, perhaps with some metal core elements. This way he can scream with rage at God and the Devil in one song while moaning over his failed schizophrenic relationships in another. Add some majestic guitars, some thundering bass and drums, and I would seriously throw out my neck. I knew there was a reason I read the whole volume in one sitting. \m/