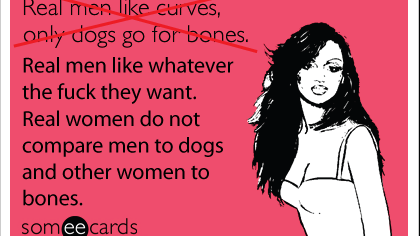 I know you feel men and women should at least be equal, right? You’re very vocal about this, but I’ve seen you use your feminine charms to crush a besotted male. I’ve seen you order men around because you know they want to get between your thighs and that you have agency of yourself so he’s fair for a game of deceit and would be a monster if he complained.

You’re also very vocal about how feminist and vegan and superior you are to the “baser” humans. Such as men, people who eat meat, and those who haven’t had the same privilege as you.

You say you’re feminist but you don’t represent my aunt, my mother, or me. You have suffered but the reason you are able to make such an outcry over your suffering is because my aunt, my mother, and me have fought for your right to scream your indignation and be heard.

The kind of behavior I describe above is a result of immaturity and not having the experience to see beyond your adolescent world of pure ideals. You haven’t done the hard part of living yet.

Let’s take an example (or two):

You can’t be vegan if you eat dairy, fauna, or marine flesh of any sort because that’s not how plant-based diets work. You don’t get to wear the flashing badge if you “cheat” with some ice cream once in a while.

You can’t claim to be a feminist if you use sex as a weapon because that’s not how equality works. You don’t get to wear the flashing badge if you use biology in that manner.

This is not what feminism is about.

Feminism is built on a respect for all people. You can’t claim superiority because you don’t harm animals but you do manipulate people with the intention of harming their emotional being. People are animals too.

Does masculinity need an overhaul? Fuck yeah. The Y chromosome is still dizzy from the abrupt changes in our culture. They haven’t had time to adjust to their demotion from “kings” to mere humans. But most of them are trying their best.

It would be helpful if you didn’t go around calling people names. It would be prudent not to willfully provoke an already outraged demographic with name calling and hypocrisy. It would be in your best interest to not obnoxiously present yourself as an easy target to those who want to discredit the feminist platform.

I do not suggest remaining silent because that isn’t an authentic state of being. I do encourage you to not give your power away to others. I do hope you believe in your self. I want to see women work together instead of competing for the most alpha male. But it isn’t just for women that feminists marched.

We also marched against the toxic masculinity that continues to destroy the fabric of our society. Complex human beings have been reduced to caricatures on both sides of the line drawn in the sand.

We marched to protect our children from war and overwork in the factories. We marched so that men were allowed to feel and express emotion without being labeled. Unless the label was human.

We’ve all been poisoned by American mores about gender roles and the idea that skin color determines your worth. America has had its pass that is granted to adolescents as they explore the world around them. It’s time for America to grow up and end the hypocrisy.

Authenticity is found in honesty to yourself and others. It is found in discovering that we are all one and to hurt one person is to hurt yourself. Eventually, this compassion will extend itself to all the creatures of this world.

And you, in your ignorance, have weaponized the very thing that subjugated all other women in ages past and yet advertise yourself as superior to others.

(C) 2018. I.O. Kirkwood. All rights reserved for text. Image may be subject to copyright.

4 thoughts on “That’s Not How Feminism Works, Sweetheart”